Clipping your cats nails can be an extremely difficult process. The first time my boyfriend and roommate tried to clip Janelle’s nails they tried wrapping her up in a blanket like a kitty burrito and doing it that way, but she ended up slicing through Dennis’ shirt and causing him to bleed. It was not a fun experience. Since then we have figured out a way to make it easier to clip her nails, sometimes she is compliant and sometimes she will still put up a fight, but here’s some tips on clipping your cats nails: 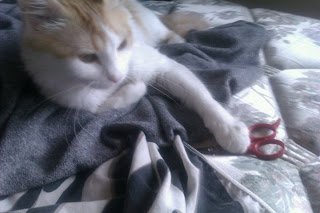 Make sure you have treats readily available, to try and coax your cat into letting her nails be clipped give her treats between every nail getting clipped.

It is going to be a process, you cannot clip your cat’s nails all at once in one sitting unless you have a really relaxed cat, but I know that my cat is not like that at all. Do one paw at a time, and then take a break and then resume.

When you go to do the first clip make sure you don’t clip the “quick.” The quick is the red part and if you clip that part there will be blood and your cat probably won’t trust you the next time you try to clip her nails. So, take her paw and push on the pad so that the nails come out. 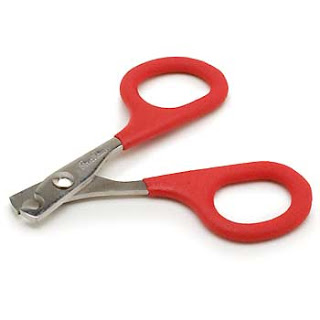 Next you want to be fast with this. Take the clippers and as quick as you can clip the nail. She may not be cooperative after the first one, she may start to try to bite your hand or try to scratch you, but offer her a treat and she’ll most probably be a bit more compliant, or she’ll run away.

You should clip the cat’s nails every week or so. Some people are against clipping nails, but it’s better than getting a cat declawed – which is considered amputation!