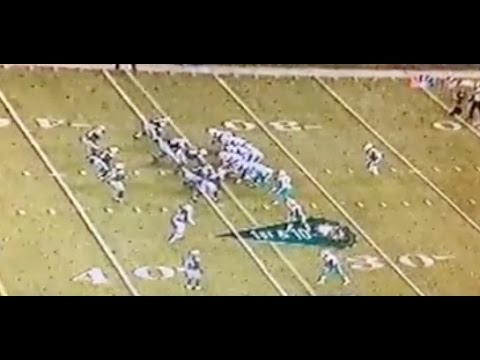 The Miami Dolphins beat the New York Jets 34 to 13 on NFL Thursday Night Football. The win was primarily due to the Dolphins’ Offense, and the play design and strategy employed by first-year Head Coach Adam Gase. One play exemplifies the Gase reliance on man-in-motion, formations, and video study to install and run a play that, in this case, rips a hole in the NY Jets Defense.

It was after the start of the 3rd Quarter. The NY Jets were, once again, not effective on offense (and it must be said that NY Jets Offensive Coordinator Chan Galey is just cashing checks while he teaches an offense that is more suited to the 20th Century than the 21st Century), and punted to the Dolphins. It was Miami ball, first and ten on the Dolphins 34 yard line.

Miami came out in a formation featuring two wide receivers and an “H-back” all on the left side of the offensive line; the tight end was on the right side, and the running back directly behind the quarterback.

Meanwhile, the corner back over Dolphins Wide Receiver Jarvis Landry came down close to him, and just to the inside. Why? To defend against the slant pattern that would take advantage of the void.

Then the ball was snapped and Matt Moore, the Dolphins QB went back to throw – a five step drop. As he did this, Landry moves to run the slant. As Landry did that, the running back moved to the right side of the offensive line and into position to block. That action caused the middle linebacker to move to the defensive left side, and in the process further open the void already created by the motion man and the defensive back / linebacker going with him.

All Moore had to do was deliver a short pass to Landry just about six yards down field running the slant. Once Landry caught the pass, all he had to do was beat the cornerback – that’s what happened. He ran 66-yards to score.

How could the Jets have stopped that? Played zone: five short, two deep zone. The five short zone would have taken the slant route away. Moore would have had to look to a deep receiver, and none were open. Plus, the rush was bearing down on him – he would have been sacked.