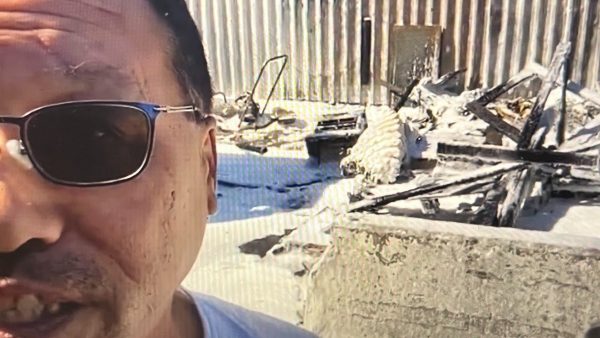 Very sad Columbus Day for famed Oakland Mayoral Write-In Candidate Derrick Soo. Soo, who’s also a Zennie62Media Vlogger, was making a video when a man Derrick says is named “Sheed” and is called “Gunnar” because he uses and has guns, went to burn down his own home and with his girlfriend in it. Derrick Soo lives just 10 feet away from Sheed, who’s on the loose after the criminal act.

Gunner Sheed is an Oakland homeless criminal known to the homeless community. Derrick Soo says the Oakland City Council does nothing at all and neither does the Oakland Police. Derrick said “Watched him walk up with a one-gallon of gasoline and burn down his own shelter, a Mercedes that he stole, and his girlfriend was staying there without his permission and she was using it to shoot up crystal meth. Soo says that Sheed elected to burn down his place with her in it just to get her out of there (totally nuts). Derrick Soo lived 10 feet away from them. Derrick says “Everyone in the camp saw it. And Gunner Sheed said to Soo, ‘Better get a fire extinguisher.’ That means Sheed did not care who he hurt in his actions. Derrick Soo managed to rescue his dog. His skin is blistering. Fire department got there in less than 10 minutes. Gunner Sheed 5-8, black, dark, medium beard, mustache, short-croppped hair, no-glasses, looks about 30 years old. Has gun shot wound on upper-left-arm bicep. Visible when he has short sleeves or a tank top. Oblong-shaped face.

Oakland Police need to go down there, find Sheed, and arrest him immediately, on the spot.