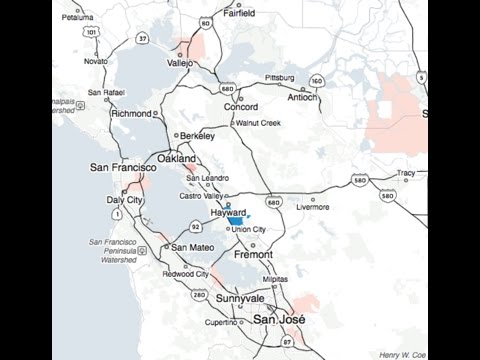 The Oakland lead poisoning problem that a Reuters report pointed to, is based on an analysis of data who’s overall spread is so incomplete that it points to a much larger problem that’s both regional and national in scope.

In the San Francisco Bay Area, The Oakland Fruitvale District is pointed to as the seat of a problem where the city is said to have greater lead levels than found in the water in Flint, Michigan. But an actual read of the Reuters data map (http://ift.tt/2hquJmB) shows that adjacent areas of Oakland where home design and age is similar, like the San Antonio District, have no data – in fact all other census tracts in Oakland dont’ have information attached to them in the Reuters map.

Beyond Oakland, San Francisco’s Bayview Hunters Point and Daily City area census tracts form what is best to call a ‘zone of concern’ (this blogger’s term) twice the size of The Oakland Fruitvale District. And the problem doesn’t stop there: looking at the map, Burlingame, East Palo Alto, San Jose, Hayward, and Stockton have census tract areas that form more ‘zones of concern’ – and incomplete data collection, because “no data” messages are replete.

In other words, and to repeat the basic message, to say this is an Oakland Fruitvale problem wildly diminishes the truth. We have to ask why the whole of East Oakland, and the Oakland Hills both north and south, don’t have data? With that, still, we have the Fruitvale lead issue, and with that, this statement by Oakland District Two Councilmember Abel Guillen, posted on Facebook this morning:

Most of you have probably read troubling stories this week about a report that found high levels of exposure to lead among many Fruitvale residents. I have had inquiries from a number of Council District 2 residents concerned about similar health risks in their neighborhoods. I want to give you a quick update. We spoke with staff at the Alameda County Lead Poisoning Prevention Program, and we will be meeting together soon to deal with problem properties in my district. The County has $2.9 million in federal HUD Hazard Control funds to spend on residential lead-abatement projects.
Working with County health officials, I will help coordinate the identification of potential properties for these grants in District 2 #OakD2 #Oakland and recruit 100 families to receive this financial support to clean up their buildings in the next year.

We are also seeking to get more complete and accurate information about the exposure levels and how to best remediate the source of the potential health impacts moving forward. County officials have indicated that the data in the Reuters news story is four years old (and exposure levels may have gone down in the intervening years), and they are working on researching and clarifying the current situation.
Also, EBMUD reports that Oakland’s water is NOT lead-contaminated. http://ift.tt/2hFcxuA
While the health dangers are real, this is not a Flint, Michigan, situation. From what we know, the source is principally soil contamination and lead from paint used in older buildings.
I will keep you posted on new scientific information as it arises and local efforts to help eliminate these health risks.