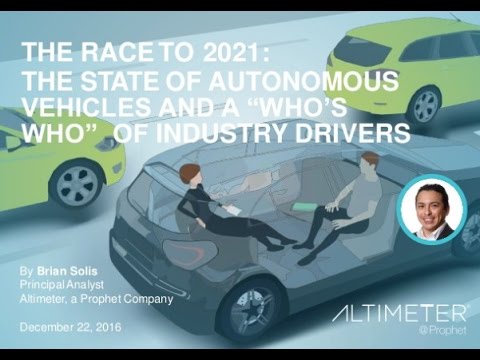 Brian Solis, my friend who is Principal / Analyst Altimeter, a Prophet Company who’s one of the foremost observers of the future of business, has a great new e-book out called “The Race To 2021: The State Of Autonomous Vehicles and A Who’s Who Of Industry Drivers”.

The 93-page document is designed to present a comprehensive view of who’s doing what in the Autonomous Vehicles Industry. Brian has every company in the work, from Audi to Ford, and even some firms you and I have never heard of.

“Executive Summary: State of Autonomous Vehicles For this market profile report, we examined the autonomous offerings of 22 auto manufacturers and 34 hardware and software providers. We uncovered the following insights and trends: • Semi-autonomous vehicles are the stepping stone to fully autonomous vehicles. Most car manufacturers and technology companies have taken Tesla’s lead and are offering features like self- parking, adaptive cruise control, emergency braking and semi-hands off driving in highway/interstate conditions. Semi-autonomous features help consumers become comfortable with the idea of robots taking the wheel. • Startups and technology leaders are driving accelerated innovation in autonomous technology; forcing incumbents to partner, acquire or ramp up R&D to compete (e.g. BMW and Baidu; Fiat Chrysler and Waymo, an Alphabet company; and GM and Lyft). Toyota, Intel and Mercedes-Benz have dedicated business units. Automakers are essentially getting into the software/ hardware and utility business as future profits will depend less on manufacturing, selling and financing automobiles and more on monetizing driving. • Luxury car manufacturers such as Jaguar Land Rover, Maserati and Porsche are looking to a future where the driver has an experiential role in autonomous vehicles. Cars will become platforms for passenger experience, creating a new canvas for cockpits and space. • In addition to data science, social science is becoming prevalent in autonomous development. Companies like Nissan and Audi take an anthropological approach to teach self-driving cars to act more human in their control and on-road actions (e.g. honking, signaling other people or vehicles, moving closer to lane markings before switching lanes).”