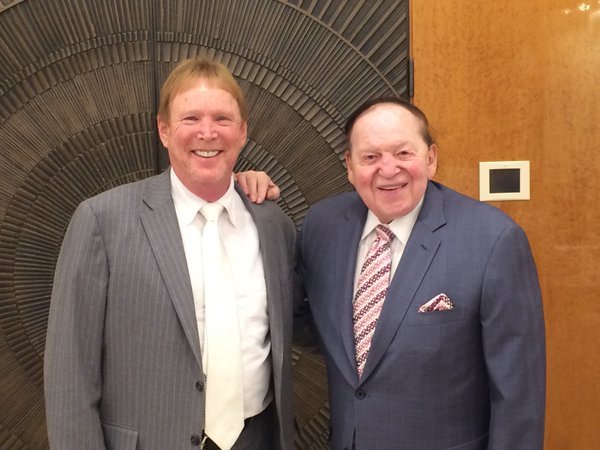 The mainstream media covering the Oakland Raiders’ effort to gain permission by the Southern Nevada Tourism and Infrastructure Committee, then the Nevada Legislature, and finally the National Football League, has completely and irresponsibly ignored the 800-pound gorilla question that hangs over the NFL team’s efforts.

The four parties have, together, filed for the so-called “Vickers Reports” to be unsealed; to that end, on July 16th, 2015, U.S. District Court Judge Elizabeth Gonzalez refused to grant the request to unseal the Vickers Reports, and because, according to the then-not-Adelson-owned Las Vegas Review Journal “reports contained sensitive commercial and gaming information that should not be made public”.

However, Judge Gonzalez did offer a caveat, of sorts, saying that the document may be unsealed in the future if the four parties, or others, can identify stronger legal reasons for doing so.

At the time, last year 2015, Las Vegas Sands and Mr. Adelson were not openly involved in partnering with the Oakland Raiders to receive approval to build a stadium in Las Vegas; this year, 2016, both are partnered, and Las Vegas Sands is asking for a giant subsidy of $750 million in public money to help pay for the construction of the structure.

Does this scenario present the proper environment where Judge Gonzalez can unseal the Vickers Reports? That remains to be determined, but what’s clear is that Mr. Adelson’s recently stated desire to own part of the Oakland Raiders, has not only placed the money laundering claims front and center, again, but leads to the question that forms the raison d’être for this blog post:

Will, or has, any laundered money been used in the Las Vegas Sands and Sheldon Adelson partnership with the Oakland Raiders? Who paid for the new video that features a Las Vegas Raiders NFL Stadium? Who’s acquiring the land upon which the stadium complex would be built? Sheldon Adelson’s interview with Yahoo Finance’s Daniel Roberts (who’s father’s attorney represented Adelson) failed to mention the money laundering problem, but did report Adelson as saying “I am taking the risk to guarantee the completion of the stadium. I think it’s going to significantly help the value of the team, so I’d like to get some interest in it. But if I took an option on the team, the interest size of the option would have to be approved by the NFL.”

That not only means Adelson wants to know part of the Oakland Raiders, but it seems all of this activity with Oakland Raiders Owner Mark Davis has been such that Adelson’s using Davis as a kind of trojan horse to gain entry into the exclusive club of NFL Owners. Since that does appear to be the case, now, the entire effort that Mark Davis has made has to be not only reevaluated but questioned, and with respect to Mr. Adelson’s still-very-fresh legal problems.

Is Mark Davis placing himself and the Oakland Raiders in a potentially-costly legal problem? How far will the National Football League allow Mark Davis to go with this endeavor?