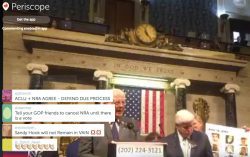 As I write this, House Democrats are staging a sit in right in the House of Representatives and because House Republicans have not passed gun control legislation in the wake of the Orlando Shootings and amid reports that the killer was on the FBI Terrorist Watch List, yet was able to buy powerful weapons.

Representative John Lewis led the sit in that started today, and is still going on as of 11:37 PM EST. What was not covered by traditional media has been seen on social media, with Periscope leading the way.

A DC Ride-Sharing Service Illegally Discriminated Against Minority Communities for Nearly Two YearsSlate MagazineWashington, D.C., has some of the world’s strongest nondiscrimination laws, with a robust Human Rights Act that protects a whopping 20 traits, from race and sex to political affiliation and personal appearance. That doesn’t mean, however, that … …read more Source:: Washington […]

USA TODAYWASHINGTON – To veteran Ralph Frias, the 70th anniversary of the D-Day invasion is one of a shrinking number of opportunities to connect with others who were with him on Omaha Beach. Frias is among dozens of veterans and their families gathered at the …14 WWII Veterans to Travel to Washington to See MemorialMy […]

Jon, Will, Rachel, Explain Amari Cooper Video By Charles Robinson Of Yahoo? #AZvsOAK – Video Ok, Jon, Will, and Rachel, since you all say that some of my YouTube videos are not allowed by NFL policy, explain how you let this video by Charles Robinson go by and stay up? Not only that, he has […]