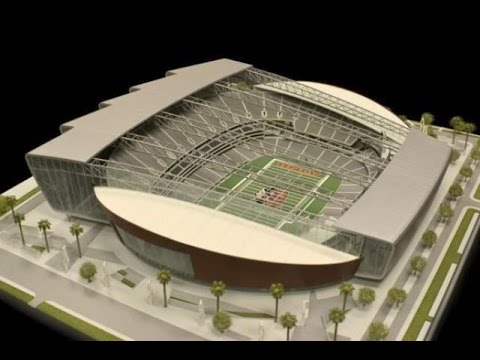 Any report or tweet that the Southern Nevada Tourism and Infrastructure Committee (SNTIC) – the group established by Nevada Governor Brian Sandoval 10 months ago – will approve a recommendation for the Las Vegas Oakland Raiders NFL Stadium over the long-planned expansion of the Las Vegas Convention Center during its July 23rd meeting is completely wrong. In fact, one very high placed source I talked to went as far as to laugh at the notion – out loud.

In case you’re not aware, Mark Davis, the owner of The Oakland Raiders, has worked (for some time behind the collective back of the City of Oakland, which has worked to form a plan to build a new stadium for the Raiders) with Las Vegas Sands and Majestic Realty to build a new NFL stadium in Las Vegas and move the team.

Most of that work happened this year starting with the Raiders visit to a site owned by the University of Nevada Las Vegas (UNLV) and culminated with Mr. Davis making a presentation to the SNTIC on April 28th. The trouble is, the media was at that meeting only to see Davis and soccer star David Beckham and completely ignored the other SNTIC agenda item on Las Vegas Convention Center expansion. The media also failed to read the technical documents on how the hotel tax would be increased to pay for convention center expansion.

But, as anyone who knows Las Vegas will tell you, plans for the much needed $1.4 billion expansion of the Las Vegas Convention Center have been in the works since 2012 – to expect Clark County, Las Vegas (which sits within it) and Nevada to just give up on that work just because Mark Davis visited Las Vegas is pure folly.

Really, any report that says this right now should be taken down immediately.

The truth is that, yes, Clark County, Las Vegas, and Nevada would love to see the Raiders come and be a part of their region, but they’re not at all willing to rush into any deal to do it. They’re not desperate. The leaders involved are quite concerned over the prospect of losing future convention business to other cities and are in the middle of an worldwide tourism industry battle where the cost of the average expansion plan hovers around $700 million.

Having said that, the people I talk to do see how a football stadium, and particularly a domed one, can help with the overall event business in Las Vegas. “We can add more events here for a stadium than a normal city can because of the nature of the business here,” said one source. So the Raiders are wanted here, to be sure, but to present the idea that Las Vegas, Nevada is willing to set aside its priorities and sell the store for the NFL is not correct.

Las Vegas, Nevada and Clark County leaders are also painfully aware of the NFL’s fear of its gambling-based culture. And while kind words of support of the idea of the NFL in Las Vegas have been uttered by some NFL Owners, it’s important to note that not only have a just a handful said that, but NY Giants Owner John Mara said to me (at the Charlotte NFL Owners Meeting) that “we haven’t seen a study or proposal or know that Las Vegas has the market for the NFL” – words echoed by NFL Commissioner Roger Goodell at the same event. Thus, the entire idea of an NFL stadium in Las Vegas has five basic hurdles to clear: analysis, politics, financing, approval, and construction. At this point, its not even passed the first one.

What is correct is the SNTIC views the Raiders Stadium and the Las Vegas Convention Center as two separate but complementary projects. Again, that’s because LVCC expansion has been planned for some time, and the use of an increase in the hotel tax was approved at the April 28th meeting – the media that was fawning all over Mark Davis ignored that news (save for the Las Vegas Review-Journal). But the Raiders NFL stadium (or any NFL team) can add to the overall capacity – but not by as much.

My sources say that the hotel tax can be increased by enough to almost include both the stadium’s $750 million ask and the LVCC expansion’s $1.4 billion that has already received approval from the SNTIC to use the hotel tax for, but there would be no surplus left over – something confirmed by SNTIC documents. Plus, my sources say they’re still in the due-dligence phase of the stadium process and “need at least two other meetings (of the SNTIC)” to flesh out. So to say that the June 23rd meeting is where the Raiders stadium will be recommended over the Las Vegas Convention Center expansion is, to repeat, absolutely categorically and totally wrong.

Moreover, the SNTIC and Nevada itself are trying to figure out how to do both the stadium and the convention center – but the expansion of LVCC is job priority number one.

To close, there is for Las Vegas also the looming spectre of the City of Oakland. The Raiders have not stopped working with Oakland and Alameda County, and NFL Commissioner Roger Goodell has encouraged Oakland Mayor Libby Schaaf to continue to work on a stadium solution. To that end, Mayor Schaaf has met with Raiders stadium point person Larry McNeil and an investment group assembled by NFL Hall Of Famer and former Raider, Ronnie Lott. Additionally, the Raiders are working on a new stadium cost study and the City of Oakland and the County of Alameda will present a new land proposal to the Silver and Black this month.

Thus, Las Vegas winds up as the de facto tool being used to get his stadium deal done in Oakland – even if Mark Davis tells Las Vegas’ Mayor Goodman otherwise.