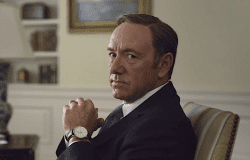 For me, watching the American version of “House Of Cards”, the 21st Century creation of Kevin Spacey and Dana Brunetti that’s based on the British classic by Michael Dobbs and Andrew Davies, always has me looking for clues that lead to a similar end for Frank Underwood to the one faced by Francis Urquhart in the UK: assassination by his own security staff as a way to avoid a certain jailing, if not termination by death penalty.

If I just spoiled the story for you, hold on, because I don’t think I have – just yet. You simply must take time to binge watch House Of Cards Season 4, and watch Seasons 1 through 3, because as a whole, it’s an extremely detailed and intricate show of acting, story, and even special effects. It’s hard for me to think of any program that can top it as a political thriller that, at points, leans over to horror show – but not too much.

In House Of Cards Season 4, we are presented with the bumbling presence of Lucas Goodwin, who goes from investigative journalist to convicted cyber-terrorist, to protected witness, to would-be presidential killer. It’s one more example of a feckless journalist who can’t seem to make anything telling the World that President Underwood and his Chief of Staff Doug Stamper (or Spacey and the mega-talented Michael Kelly) are a couple of sociopathic killers.

But a hand-written memo written by Goodwin is found by none other than Nathan Green, played by Jeremy Holm. To me, Nathan Green is the most important figure in House Of Cards, other than Frank Underwood, his wife and eventual First Lady Claire Underwood (Robin Wright), Stamper, or Zoe Barnes (Kate Mara).

In the UK version, Cordid is a combination of Edward Meacham (the Secret Service Agent who winds up being a kind of personal assistant to Frank Underwood) and Nathan Green. In the first House of Cards, Cordid winds up holding all of the evidence that could implicate Urquhart in the murders of journalist Mattie Storin (Zoe Barnes’ counterpart), and works with Claire to arrange for Urquhart to be killed by a sniper – essentially keeping him from an embarrassing, legacy-killing, end.

Like Cordid, Nathan Green has the evidence that could implicate Frank Underwood. But where the two versions of House Of Cards differ, is in the American version, there’s no dramatic death by car bomb. Michael Kelly’s Doug Stamper is an amazingly screwed up man. A person who’s so caught up in being the king maker, and doing the king’s dirty work in killing Rachel Posner and Gavin Orsey with his bare hands and whatever tools were available, that he leaves a trail of misdeeds that’s bound to come back and bite him – the question is when.

House Of Cards Season 4 points to a very dangerous Season 5. The Underwoods are the focus of a damning story written by Zoe Barnes former boss Tom Hammerschmidt (Boris McGiver), who is on track to trigger an investigation that will ruin Claire and Frank – and they know it. But, rather than throw in the towl, the couple ends Season 4 by issuing a what is a formal declaration of war on terrorism but is an informal one against their enemies.

Samsung Gear VR Ride At CES 2016 #CES2016 – Video Samsung had this really cool kind of ride based on Oculus virtual reality technology. The patrons sat in seats that could move on command and synched with the content that Samsung was showing. In all, quite impressive. via IFTTThttp://youtu.be/rz9sQhntpPM