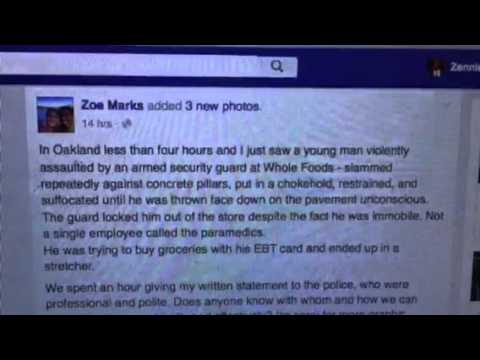 This is the latest in a rash of racist and classist acts in Oakland and the San Francisco Bay Area. This from the Facebook posting by a witness:

In Oakland less than four hours and I just saw a young man violently assaulted by an armed security guard at Whole Foods – slammed repeatedly against concrete pillars, put in a chokehold, restrained, and suffocated until he was thrown face down on the pavement unconscious. The guard locked him out of the store despite the fact he was immobile. Not a single employee called the paramedics.
He was trying to buy groceries with his EBT card and ended up in a stretcher.

We spent an hour giving my written statement to the police, who were professional and polite. Does anyone know with whom and how we can share this story most justly and effectively? I’m sorry for more graphic images of violence against black citizens, but I was here and spoke to the victim (to keep him conscious), perpetrator, several bystanders, and cops. Armed private guards cannot be tolerated in our grocery stores and communities when this is what they do to paying customers. Whole Foods needs to be held accountable – security is NOT selective, it is collective.
via IFTTT
http://youtu.be/Qz9x_CWPYa4