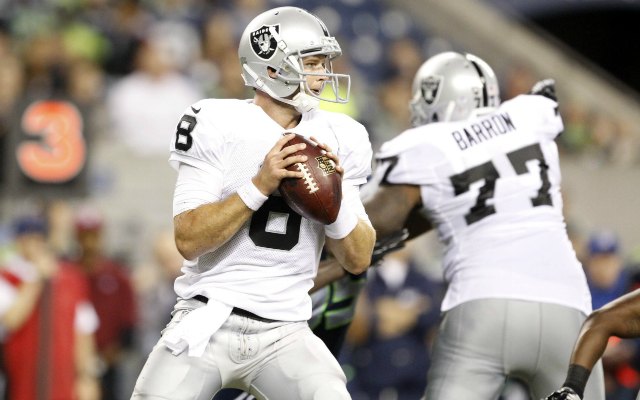 I was in New York City covering the last day of the 2013 NFL Draft, and sitting with my friend Bill Chachkes when the Oakland Raiders turn to pick came up in the 4th round. I was all set to report that the Raiders were going to take Stanford Cardinal Running Back Stephan Taylor, when they did this:

It’s not that Arkansas QB Tyler Wilson was a bad prospect (he set 29 Arkansas records) but by the time of the 4th round, the Oakland Raiders had already stock-piled quarterbacks, including Matt Flynn and the amazingly talented Terrell Pryor, as well as Matt McGloin, and really needed to focus on a running back to spell the injury-prone Darren McFadden. Instead, they picked Wilson. That, right there, was the beginning of the end of Tyler Wilson’s first NFL stint.

Why? Because the Raiders Offensive Coordinator didn’t know how to create an offense that showcased what Wilson does well, and avoided what he’s not good at. Tyler Wilson’s not the most mobile quarterback, but he can move in the pocket. Wilson would benefit in a system that designed in QB mobility with sprint passes, rollouts, and various approaches that add up to him not holding the ball a long time. Absent that, he’s the modern version of a true sitting duck.

Wilson has to better recognize when his protection is breaking down, and move earlier. That’s his problem. If he can do that, and throw a dart consistently, he’s got another shot, for sure. That chance starts Sunday with the NFL’s Veteran Combine.

Tyler Wilson joins the following quarterbacks at the first ever NFL Veterans Combine:

The problem that all of these collegiately legendary signal callers face is that there’s a giant glut of talented quarterbacks who are arguably NFL-ready. That’s mostly due to the NFL’s allowance of players who didn’t complete school to come out for the NFL Draft – the underclassmen.

Thanks to the 1990 change in the NFL Draft-eligibility rule allowing college juniors to enter the NFL Draft, rather than having to wait until their senior year, the door was opened for underclassmen to come into the league. Then the 2011 NFL Collective Bargaining Agreement installed a rookie wage scale, reducing guaranteed money and forcing players to wait until their fifth year in the league with the team that drafted them to collect a giant contract. NFL agents adjusted by working to lure underclassmen out early, and with the promise of getting rich at a younger age.

The result is many more reasonably good college football players out there who either never got drafted, or didn’t pan out with the team that picked them. Some of them were underclassmen; others, like Wilson, were not.

Regardless, the large number of them – eligible 2015 NFL Draft rookies like Jameis Wison, Veteran Combine participants like Wilson, or free agents who land a try out at some point this year, and folks like former Notre Dame star and now TV broadcaster Brady Quinn, who was working out with QB coach Jeff Christensen on a comeback attempt this year.

With that, we have just 96 QB positions in the NFL, when you consider that teams generally keep three on their rouster – and many of those positions are filled. So here come the 25 2015 NFL Combine QBs, then the seven in the NFL Veterans Combine, and then the Brady Quinns, Tim Tebows, and Vince Youngs, and not to mention the Arena Football League standout who just might get that try out with a team.

That ads up to the field Wilson has to beat, and then once he does that, if he does that, he’s got another battle with his QB teammates to win the starting job on an NFL team – then he has to keep it or even keep his number two or three job.

Let’s see how far Wilson gets.