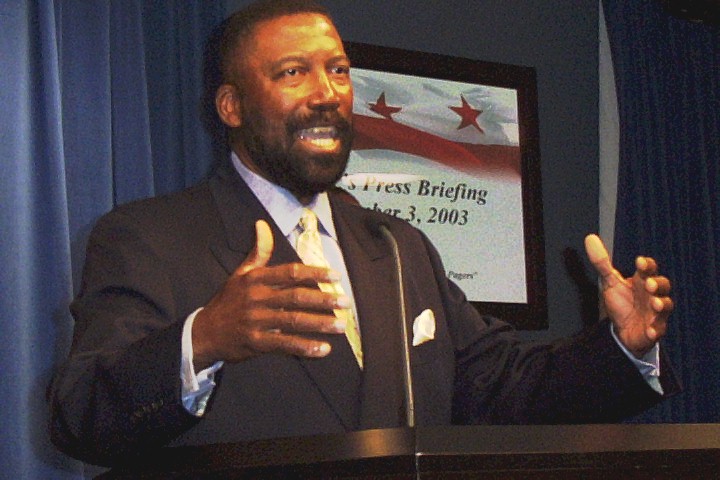 Happy Holidays! A ton of Oakland News to catch up on after taking a post-election break of sorts, so let’s get to it!

Robert Bobb, Oakland’s former City Manager / City Administrator between 1997 and 2002, is, barring some political weirdness that the Oakland-Alameda County Coliseum JPA has been known for, returning to be a consultant to the Joint Powers Authority on the matter of Coliseum City after that board votes to receive him on December 8th.

According to one observer in the know, the responsibility of The Robert Bobb Group, will be to get the area that is planned to be Coliseum City developed, the planned new stadiums built, identify large scale developers, and all without causing a ton of public money to be spent.

The return of Bobb will be the best move the JPA has made to date. The former Washington D.C. City Manager, “Mr. Bobb,” as we call him (he was my boss between 1999 and 2001, when I headed the Super Bowl – Oakland bid effort) has built a solid reputation as a sports stadium development expert representing the public sector, and has racked up many clients in that area, and before that was credited with building the stadium for the new Washington Nationals Baseball Organization.

Currently, he has been involved in building a stadium for the Major League Soccer franchise D.C. United. And Mr. Bobb’s highest profile engagement was as Emergency Financial Manager for the Detroit Public Schools to 2011. And in 2012, Mr. Bobb even considered a run for Mayor of Washington D.C, until a brief battle with throat cancer altered his plans. Mr. Bobb would go on to beat cancer, eschew life settlements, and add one more victory to his already storied legacy.

Indeed, Robert Bobb’s only blemish, if it could be called that, or perhaps an honor, was to have been fired by then Oakland Mayor and now California Governor Jerry Brown in 2002. Why? Because Robert Bobb was working to build a downtown baseball stadium in Oakland, and which would have been on the land currently occupied by the Uptown Apartments complex. But Brown once said “There will not be a fucking downtown stadium in Oakland as long as I’m Mayor,” and yes, he did say that. (If you think about it, Jerry seemed more interested in altering Oakland’s population makeup that landing economic homeruns. Some say ‘Well, Jerry doesn’t like sports’ but for people to attach themselves to such a point of view is as stupid as the point of view itself. A big city mayor should not have such prejudices, but Jerry did.)

Supplemental: on Twitter, Darren Lion asked what the difference is between Floyd Kephardt and The Robert Bobb Group. Answer: they’re complementary in that Mr. Kephardt finds investors, where Mr. Bobb finds developers, and Mr. Kephardt represents the current ENA group, whereas Bobb will represent the Coliseum JPA.

The Matter of An Executive Director For Coliseum JPA

Robert Bobb’s return does not settle the matter of hiring an executive director for the Oakland Coliseum JPA – or it may not at first glance, but a closer look reveals another story.

First, by all that’s right and just, Scott McKibben should be the Oakland Coliseum JPA Executive Director. Mr. McKibben was the second highest-rated choice for the job by The Hawkins Company, the executive search firm the Coliseum JPA charged with finding a new boss. The number one selection, Pittsburgh Steelers Executive Director Mark Hart, wanted north of $500K to do the job. Scott was the next choice, asked what his “price” would be, but was not given a chance to counter offer. Then, wildly, former Dublin Mayor and California Assemblyman Guy Houston emerged as the third choice, and at a much lower salary of $250K. After the revelation that Houston had defrauded an elderly group in 2007, a series of communications ensued and Scott (the former head of The Rose Bowl who steered its renovation project and former publisher of the Oakland Tribune) got back into his rightful place to be considered as the hire for the Coliseum JPA. But, for some reason, there’s a couple (and yes, I mean two) of the Coliseum JPA Board Members who are standing in the way.

Second, without naming names or sources (since I know everyone involved in this, and their friends, and their friend’s friends) this blogger can report that others around the country perceive the Coliseum JPA as trying to put into place someone they know and “can control” and that’s how Andy Dolich’s name came to be floated just as it seemed Scott’s path to the position was cleared. The weirdness of that effort is that it was Dolich, currently consultant and professor in the University of San Francisco Sport Management Department, and former executive with the Oakland A’s, Golden State Warriors, San Francisco 49ers, and Memphis Grizzlies, himself who openly recommended Scott McKibben for the JPA Executive Director position – they are good friends.

Thus, the only way Dolich’s name could have surfaced as a candidate was if one of the Coliseum JPA Board Members contacted him and failed to give him the full story of what was going on. That’s not fair to Andy, and further continues the sad pattern of political games that prevent the JPA from being ran well and upsets its current sports team tenants. For example, one Raiders operative has said that if Dolich becomes the Coliseum JPA’s Executive Director, the Silver and Black will move to San Antonio. The Raiders and the Oakland A’s bosses want the JPA to hire Scott McKibben, and have made this known behind the scenes.

I do know that Andy stands ready to help Oakland. The best situation would be for the Coliseum JPA to have Bobb, McKibben, and Dolich all involved in the matter of that organization and Coliseum City. I can only pray for such an outcome. Dolich as Executive Director can’t just happen as it would totally bypass the process that was set up and that Scott emerged as the top candidate from, and for no other reason than simple whim. The motion to hire Scott that’s to be introduced at the next JPA meeting should be voted on favorably.

The main problem that causes all of this mess is that the Coliseum JPA is without any watchdog organization to check its power. I have asked each Oakland City Auditor to focus on the Coliseum JPA; each one, from Norma Lau to Roland Smith, and finally current and outgoing City Auditor Courtney Ruby, have failed to do so. And in Ruby’s case, she claimed she didn’t have the resources to do it, even as she was taking on other projects such that she proved she did have the ability to audit the Coliseum. And while the new Oakland Auditor-Elect Brenda Roberts has said to me she will look into the matter of the Coliseum JPA (which is promising) she hasn’t taken office yet.

The Coliseum JPA has been allowed to become a political playground and not a serious sports organization. The current JPA board is dominated in power by elected officials who are not sports business experts. These are all amazing people, and friends who I love and respect beyond measure, but someone has to sound the alarm regarding what’s going on down there, so it might as well be me. For example, there’s detailed talk of stories of attempts at nepotism within the Coliseum JPA ranks. That news comes out because there are a lot of people in the sports business World around America who are watching the Coliseum JPA, know people who work with it, and are asking a ton of questions. That chatter comes up at sports marketing parties, and with Oakland in position of possibly losing all of its teams, the frequency of talk and gossip about the JPA has increased markedly. People in the sports business want to know why Oakland can’t get its collective act together, and why its close to losing, some say lost, the Golden State Warriors?

The Coliseum JPA, The Oakland City Council, and the Alameda County Board of Supervisors must understand that as Oakland is one of only a few cities with three sports teams, and in a situation where it may lose all of them in the space of five years, and in a hyper-media sports environment, it’s under a giant Worldwide microscope. Nothing the Oakland Coliseum JPA does is in shadow anymore.