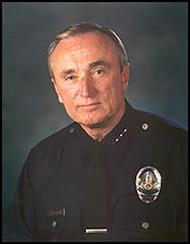 Oakland is bringing in William Bratton as a public safety consultant.  Bratton made his name nationally as New York City police commissioner. During and after his tenure, New York significantly increased police staffing and experienced an unprecedented—and continuing—reduction in violent crime. After New York, Bratton came to Los Angeles, first as part of the federal monitoring team for its consent judgment (similar to Oakland’s NSA), and then as chief. In his 8 ½ years with LAPD, Los Angeles reduced homicides 41%, reduced violent crime 45,% and came out from under Federal Court supervision.

MOBN! representatives recently joined community leaders in a meeting with Oakland’s policing consultant Robert Wasserman, during which he announced the plan for Bratton’s involvement, described Oakland’s public safety situation as “the most difficult and complex policing challenge in the United States” and discussed long and short term strategies. Here’s MOBN!’s take:

Oakland’s violent crime rate has now gone beyond crisis and reached emergency levels. Oaklanders cannot expect that any one individual or quick solution is going to turn things around.

Wasserman’s and Bratton’s track records as leaders give us some reason for hope. But Oakland will only turn this around if Wasserman and Bratton speak this truth: reducing violence in Oakland with 600 officers or anything close to that number is impossible and unrealistic.  Also, they must dig deeply into the complex politics that have landed us in the current mess.

At the recent meeting, Wasserman was asked about the question of sworn staffing levels. He first responded that the matter was under review. He then stated that, while there are cities with a population of 400,000 that can keep their residents safe with 600 police officers, Oakland isn’t one of them.

In addition to bringing on Bratton, here is some of what Wasserman has in mind for Oakland:

Quick Wins:  Wasserman believes that he, Bratton and the OPD must start with some short-term actions to rapidly bring down crime. Operation Cease Fire is a critical part of this plan. He believes making Cease Fire successful requires the involvement of every City agency at the highest level—and the moral voice of the community must rise up against violence.

MOBN!’s comment: As long-time supporters of Cease Fire, we certainly agree it is important. But the start-up pace of Cease Fire in Oakland has been agonizingly slow, with one call-in this fiscal year. City Council only approved hiring a project manager last month. We have no idea when that position will be filled. The current Cease Fire consultants have estimated it will take a year before we know to what extent the operation is working.  This will not be a quick win.

More focused responses to 911 calls:  Wasserman proposes that OPD limit its immediate call responses to crimes in progress, so that officers decrease their response time to critical calls and have more time to police their assigned beats. He believes keeping officers in their beats will result in more proactive policing, which in turn will lead to crime reduction.

MOBN!’s comment:  Plenty of data supports the view that beat policing and proactive policing reduce crime and build relations between the community and officers. But Oakland only has about 260 total officers available for patrol. Only a fraction of them are patrolling at any given time.  We question whether there is even sufficient staffing to respond to crimes in progress.  And with such a small number of officers, we question whether there is an opportunity for community relationship-building, even if calls are reduced.

Change from Two Policing Zones to Five: Wasserman recommends Oakland change the structure of the department back to one of strong, geographic assignments.  In each of five zones, a captain will control all resources and be accountable for community relations.  Each area will have two lieutenants with similar accountability.  Implementation will start in two zones in February, followed by replication in the other three.

Community Involvement:  Wasserman expresses a need to involve every aspect of the community in policing issues.  This is more than just public relations—every part of the community has to be involved in, and responsible for, making the City safe.

MOBN!’s comment:  We agree that community commitment is going to be essential to bringing public safety to Oakland.  As we stated above, our city is in a public safety emergency.  We had 131 murders in 2012. Over the long-term, we need to bring the OPD and the community together.   But we have to stop the gun violence now.  Getting community consensus in a polarized community like Oakland may be possible, but it won’t be easy and it won’t happen quickly.  And we can’t wait for it to happen before we stop the horrible level of violence in our streets.

Wasserman told us he is inventorying governmental and non-governmental programs aimed at crime reduction.  Hopefully, he should learn about both the programs and the effect of the “voice of the community” in Oakland.  He should learn that Oakland has spent about $40 million in eight years on Measure Y “violence prevention programs,” supported by some of the most vocal and politically active elements of the community.  He should also learn that the average murder and average violent crime numbers during those years are both about 36% higher than the same numbers in 2004, the year Measure Y was passed .

There is plenty of data to show that more police officers means less violent crime. We’ll be posting more about this data soon.  There is no data to show that a city with inadequate police resources can reduce its crime rate with programmatic solutions.  Chief Bratton recognized this in a telephone interview with NBC Bay Area:

The biggest challenge is the number of officers,” Bratton said. “When you add them and use them appropriately, you get results.

Of course, Chief Batts told Oakland the same thing, and City Hall ignored him. So while we support the Wasserman initiatives, and look forward to Chief Bratton’s arrival, we hope they will focus not only on structural changes and community consensus, but on this core public safety fact:  we cannot make Oakland safe without an adequately staffed police force.  And the Mayor’s office and City Council have to make staffing their number one priority.

MakeOaklandBetterNow
Make Oakland Better Now! is a citizen advocacy group supporting public safety, accountability, transparency and budget reform in the City of Oakland. More information at www.makeoaklandbetternow.org and www.oaktalk.com. Like us on Facebook at www.facebook.com/makeoakbetter or follow us on Twitter @makeoakbetter

Derek Carr Not Issue For Oakland Raiders; System Is #RaiderNation

Derek Carr Not Issue For Oakland Raiders; System Is #RaiderNation – Video Derek Carr Oakland Raiders QB is doing a great job. But some Raider fans think I am against Derek Carr because I predicted that Christian Ponder would start over him and due to his relationship with new offensive coordinator Bill Musgrave. I was […]

Report: A’s sign Billy ButlerSFGate (blog)ESPN’s Buster Olney also is reporting that the deal is finalized. The A’s have not confirmed the deal yet, though that could be as simple as the team waiting on a medical report. Oakland always is in search of right-handed power, and with Adam Dunn … …read more From:: Oakland […]

California cities are rebelling against state sanctuary law, but how far can they go? – The Mercury News