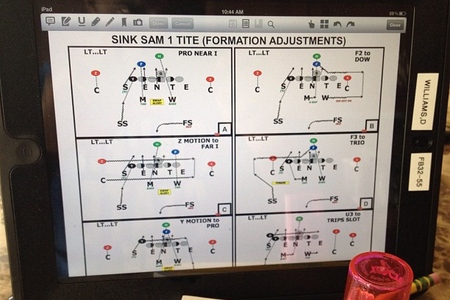 On Friday, D.J. Williams, the Denver Broncos’ for some God-only-knows reason, a key defensive photo page from the team’s new iPad-based playbook. I guess Williams, the Broncos premier inside linebacker, was so excited by the pretty, high tech presentation he had to share it. But in doing so, he basically gave away not just one of the base Broncos’ defensive formations, but how the players are expected to play it, and adjust to basic offensive formations. To have this kind of information available is golden for any offensive coordinator. Let me show you why.

First, the design of the page indicates the focus of the slide is on what the inside linebackers (called “M” for strong side and “W” for weakside) are supposed to do against a given offensive formation. Moreover, it tells the overall design of the defense, so let’s start there.

So we have a defensive formation where the defensive line is strong to the weakside, and the linebackers are strong to the strongside. It looks a little like the old Chicago Bears 4-6 Defense, but it has seven, not eight men up, and only one linebacker over the tight end, not two.

The California Split 4-3 Defense Of 1993-94 was installed by my friend Artie Gigantino, who was the defensive coordinator under then-Head Coach Keith Gilbertson. Artie, who would entertain my defensive ideas while I was working as a columnist for The Montclarion at the time, introduced me to the idea of a defense he called “split” and was able to accomplish the same inside pressure the 4-6 Defense brought, but without calling for eight people up front close, and three defensive backs.

The slide also shows what the “S” and the “W” would do versus the I Formation. So here’s an example of why D.J. Williams action was so damaging: the next text is a play that is designed to take advantage of the Denver Defense.

The “B” version in the photo shows an I Formation with a blue dot that has a black line moving to the right. That dot is the fullback going in motion. Note that “W” goes with him, and the I Formation halfback stays home. So, a play taking advantage of what the Broncos do defensively would have the Fullback going in motion wide to the outside right, while the QB watches to see if “W” goes with him; at the snap of the football, the QB turns and fakes a dive play to the Halfback, then pulls up, and looks for The Split End running a quick slant right into the middle where the “W” would have been.

See how that works? Plus, we can take the Fullback and have him run a fly pattern after the man in motion move wide beyond the Split End. He’s number 2 because the timing of the play favors the throw to the The Split End; if he’s covered, he QB looks to the Fullback. If he’s covered, the QB looks to his “alert” Flanker running a fly pattern on the other side, or just throws the ball away.

But look at what we’ve done, and all based on a Broncos Defense we would have not known about save for the Twitter efforts of D.J. Williams. Normally, coaches have to wait until preseason games to get some idea of what a new defensive coordinator will do; not this time.

Panthers’ Torrey Smith: Anthem policy turns protesters into villainsVirginian-PilotExpanding on thoughts he shared in a tweet last week after the new policy was approved in Atlanta, Smith said he was disappointed in the decision by NFL Commissioner Roger Goodell and the league’s owners. “You’re disappointed but not surprised … …read more Source:: NFL Commissioner News […]

Carrie Underwood’s face at the ACM Awards: A guide to an enduring mystery – Chicago Daily Herald

Chicago Daily HeraldBut then, others wonder, what about the photo with the “Below Deck” star? She doesn’t look that different, right? Questions consume social media users for quite some time. • Saturday, Jan. 6: During an NFL playoff game, NBC airs a preview of a new …Carrie Underwood’s face at the ACM Awards: A complete […]