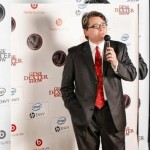 Rarely does the general public get to see Hollywood Babylon at work. That is unless you happen to be on a social media platform just as L.A. cannibalism is taking place in realtime.

I first saw the shocking news of Whitney Houston‘s death from a @TMZ tweet. Surprisingly, others were posting it a full 3-4 minutes prior to Mr. Levin’s team, as TMZ is known to be first with all things Celebrity. A few minutes later, my friend MonaLisa Murray was able to confirm with me directly this event was being played out somewhere in L.A., she having just seen WH on Thursday night. In another 10 minutes it was @LAscanner who announced authorities were rushing to the Beverly Hilton Hotel.

Not just the 4th floor host of Ms. Houston’s stay, but site of the annual Clive Davis pre-Grammy telecast party.

One would assume that after 30+ years of collaboration between them AND hearing Clive Davis say how WH was family to him, especially on shows like Oprah during WH’s comeback album promotion two years ago, the room would go dark in honor of her.

But this is the entertainment Industry.

What happens next is something few writers could ever dream of for a non fiction work, screenplay, treatment. So Fellini in its absurdity. So Daliesque in its deformity and chaos.

While investigators worked upstairs, the Grammy Association (NARAS) in all of its inconsolable grief, its endearment toward our version of Royalty in this country, its gratitude for her creative and business contributions during the most profitable era in music history…………..threw a party under the bathtub Whitney Houston died in, three floors below.

Limousines, Paparrazi, full bar. A twitter message from @BeverlyHilton expressing condolences to the Houston family, followed by tweets and photos of Tony Bennett and Gladys Knight joining the Red Carpet. From the time Tom Hanks arrives, smiling for the press – WH is upstairs, on hold, still quite deceased, subject of a police matter that will take another three hours before the coroners office receives its summons to get her away from this carnival.

Social Media timelines are a naked bitch. Thank You Tom Hanks for helping mark it.

Meanwhile, the Grammy internet live feed, featuring guests paying homage to the lady on the 4th floor, dead since late afternoon, filled our screens with loving, touching stories and accolades about someone who hadn’t been given the dignity of a little physical distance from this charade.

Fortunately, we did not hear about Whitney Houston being taken downstairs to be used as a sushi model, perhaps out of dietary concerns, as summertime tours require tone bodies that do not eat rice.

While all this is going on, the twitter account of @HollywoodPhotog informs me that a “crackhead” should not prevent a “huge” event/party.