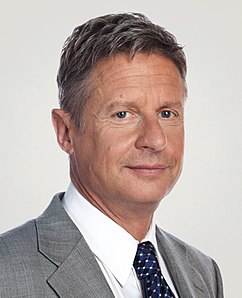 Gary Johnson dropped out of the Republican race and is now going to be running as a Libertarian Candidate, which is funny, because Ron Paul is the most libertarian person running right now – but he is running as a Republican. Ron Paul also said in a newsletter early in the campaign that if he doesn’t win the Republican nomination then he will not run as a third party, but he will retire.

Gary Johnson dropped out as a Republican last week, and the Alamogordo Daily News reports that as of Wednesday (tomorrow) he will be a Libertarian candidate:

“He has been in the presidential race as a Republican since April, but has barely registered in the polls. Johnson was shut out of all but two of 15 presidential debates this year.

“Anyone who looks at what has happened would say I’ve been treated unfairly,” Johnson said in a recent interview. “I think I’ve been hung out to dry by the Republican Party.”

In turn, Johnson will defect from the GOP in hopes of pumping oxygen into a presidential campaign that even he said was dying.

Johnson was a construction company owner without any political experience when he ran for governor in 1994. He won the Republican primary by a whisker, then upset the sitting governor, Democrat Bruce King, in the 1994 election.

Johnson acquired the nickname Governor No because he vetoed a record 200 bills in his first year in office. During his eight years as governor, he vetoed 742 bills.”

Maybe for once a third party candidate can actually do some damage, but probably not.

Because I'm Nikky Raney & you're not. Student, blogger & aspiring journalist as well as editor. I have already been a paid journalist and I have a lot of experience. Worked for political campaigns as well as at a television station. I am currently attending New England School of Communications in Bangor, Maine. I was Managing Editor and was one of the creators in 2006 of the largest student run newspaper in New England: The Tide, at Dover High School in Dover, New Hampshire. I was born June 7, 1990 in the Philippines. My personal site is The Future of Journalism - NikkyRaney.com You can follow me on twitter - http://twitter.com/nikkyraney