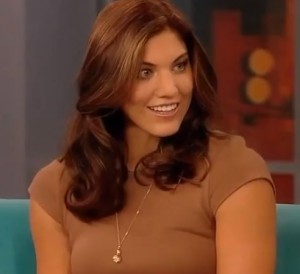 Hope Solo can’t win Dancing With The Stars because it would interrupt the Hollywood system that rules the producers of the show.

In fact, the producers of DWTS are so afraid that Solo will win, they’re seemingly pulling out all of the stops to make it happen.

If this blogger didn’t know better, it would be fair game to assert that perhaps some of the contestants bought their way into the production, including public relations contracts, thus buying a higher ranking than they could achieve on their own.

How else to explain how Hope Solo has been treated? In a video this blogger created to cheer on Solo – this one:

It was noted that People Magazine actually ran a cast photo that left Hope out of it ( along with war hero J.R. Martinez) even as she was introduced as one of the Dancing With The Stars cast members.

In various small ways, the Dancing With The Stars promoters have done what they could to force our attention toward the stars they wanted us to vote for. That’s one reason for the constant, incessant, and really freaking annoying focus placed on Chaz Bono. If you think that was just because of Chaz’s sex change, you’re as much a fool as anyone who walked the Earth.

Now, I need you to put your thinking cap on here.

It doesn’t take a rocket scientist to know that all it take to make a star is one big movie or television role. Transformers producer Michael Bay has used that formula to turn unknowns into stars, as he did with Megan Fox and now with Rosie Huntington-Whiteley. Since Dancing With The Stars provides the same opportunity for Hope Solo, it seems logical that the producers should promote her, right?

Well, the fact is, they don’t. In show segments Hope’s generally taken out of background view of the camera and little has been made of how well she and the U.S. Women’s Soccer Team represented our country this year. It’s almost as if the producers of Dancing With The Stars know that if they pushed Hope on the media, it would make her a star, and fear that such a development would harm their other contestants that do represent the Hollywood system.

Of course such a view would be idiotic, but it’s the only way to explain how little media has been focused on Hope Solo. They think that because Hope’s new, it would cause a drop in ratings, but that runs counter to human habit. Hope’s a beautiful woman that anyone would want to see dance. Why not capitalize on that?

And that’s where my assertion of payola comes in. If one or two of the star contestants actually paid into the production of Dancing With The Stars, including PR, they could essentially buy their way into the finals, even to the point of working the judges to get dancing outcomes favorable to them, and not to Hope Solo.

In that way, Solo could get better each week, but the judges, instructed to be biased against her, would just keep making negative comments. At the same time, the judges make overly positive comments about other dancers who’s performances were in some cases very questionable. But in Solos’s case, the Dancing With The Stars judges have been uniformly harsh on a consistent basis.

The Dancing With The Stars producers know that Hope’s got a mix of the outspoken and the sensitive: she wants to speak her mind, but is concerned with what people think about her.

The Dancing With The Stars producers are using that against her, hoping the judges harsh comments work to break Hope emotionally and either want to quit (the extreme), or just not do a better job the next time around.

That’s my view and I’m sticking to it. Someone has to get to the bottom of this outrageous fix. Why show us a video of Hope crying in a private moment? What was the point of all that? Certainly Hope didn’t authorize that at all.

It was pretty dirty stuff.

And while you may point out that producers were not emphasizing JR Martinez, that was true at first, but after his tribute to fallen soldiers, that wasn’t the case anymore.

For Dancing With The Stars to remain “clean,” either she or J.R. Martinez, the war vet who’s performed so well and seems to be not of the Hollywood system, must win Season 13.

702In other trending news, Russian actress, Evelina Bledans lost her cool when she physically assaulted a female audience member during a live interview after being criticised her for having a baby at 49. …read more Source:: Actress News By Google News

Star Wars use the Force to create limited edition pens with CROSS – Mirror.co.uk

Star Wars use the Force to create limited edition pens with CROSSMirror.co.ukTo celebrate the saga, CROSS has unleashed a new series of writing instruments and journals, fit for any Galaxy. With these collectibles they claim they’re putting the ‘force of fine writing, creativity and storytelling directly into the hands of Star …Rebooting ‘Star Wars‘ games, […]