Ross Mirkarimi. For Sheriff? When the news that San Francisco’s District Five Supervisor, 28-year San Franciscan, and co-founder of The Green Party of California, Ross Mirkarimi was running for sheriff first hit the eyes and ears of this blogger, the first question was “Why?” But then the second question was “Why not?” The idea of a leader in law enforcement that wasn’t created from the prison-industrial complex that runs the jails in California made a ton of sense.

In a climate where it seems that everywhere one turns, that law enforcement officials have developed a bunker mentality with respect to community relations, what better person to the next sheriff than a San Francisco supervisor? But would Ross be in over his head? After my long talk with the very-popular elected official, the answer from this space is a resounding “No.” What I learned is that Ross Mirkarimi is far more ready to be sheriff that I suspected. The talk wasn’t intended to challenge him on video, that’s not what’s done here, but to learn more about Supervisor Mirkarimi, from the perspective of running for sheriff.

To learn more about Mirkarimi, I visited his campaign office at 219 7th St. at Howard, in an area Ross describes as in enjoying a renaissance. It’s a mix of middle class and poor, and very much such that the action of the street is right out of the door’s threshhold. It gives the campaign the image is cultivates: that of a busy, grassroots effort.

In it, Ross and his staff and supporters are a blur of activity, with his wife Leona and two-and-a-half year old son Theo present, the whole has the feeling of a giant family of people more than a political operation.

But a busy campaign office is to be expected; what made Ross want to do this anyway? Well, for one, he’s scheduled to be term-limited out in 2012, but that didn’t mean he had to run for sheriff, Ross could have ran for Mayor of San Francisco. Indeed, there was an effort to draft him, and former-San Francisco Mayor Willie Brown went on the record as saying Ross was going to do it. But Ross didn’t do it because, as he stated in our talk “I predicted the cavalcade of characters (it has), and he did not know Hennessey if was going to retire or not.

(Ross says that Hennessey offered him a position in his office three years ago, but Ross didn’t take it because he didn’t want to give up the Supervisor’s Office and leave it to then-Mayor Gavin Newsom to select his replacement.)

But slots are one thing; desire is another. Why did Ross focus on the San Francisco Sheriff’s race? He says that the decision was borne of his long-developed knowledge of the office, and his relationship with its long time representative, Sheriff Mike Hennessey. After 31 years on the job, Hennessey is retiring, leaving a large set of his famed cowboy boots to fill. Ross has long admired that Hennessey saw that the Sheriff’s office was “about more than just locking up people,” and placed a heavy focus on rehabilitating the prisoners. 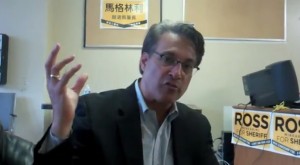 Ross says that in 2004, he took over a District Five that was known for heavy, violent crime, and since then it’s experienced a dramatic drop in crime rates. The Supervisor believes there’s a place for progressive values in law enforcement and he “didn’t want to ceded that to someone else,” who may be conservative. Mirkarimi worked to cultivate a relationship with Hennessey that led to a fast endorsement when Ross decided to run for the office. Indeed, considering the admiration he has for the current top sheriff, it’s doubtful that Ross would have made the leap had Hennessey not given his nod of support.

Supervisor Mirkarimi wants to keep the progressive tradition and style set by Hennessey in place, and that’s why he says he’s willing to “put it all out there” and run in a general election for Mike’s position.

What Kind Of Sheriff Will Ross Be

Ross says he will take time to introduce himself to his charges at all levels of the Sheriff’s office. He gets that some in the organization may see him as an outsider and he’s sensitive to the need to remove that perception, but not at the expense of the values he want to see maintained and enhanced. That means a big focus on prisoner rehabilitation and continued work in reduction in recidivism rates.

Moreover, Ross is mindful that he may not have the entire support of his charges, should he win, and points to Mike Hennessey’s history as an example “They never supported him during his elections,” Ross said. Yet, Hennessey served for over 30 years as an elected sheriff, or “one foot out, one foot in” as he put it.

Ross says it’s just part of the deal that he’s running against two people – Chris Cunnie a former undersheriff and union leader, and Capt. Paul Miyamoto – who are from the San Francisco Office of the Sheriff, yet didn’t have Hennessey’s backing. But where, in the view of this blogger, Ross has the advantage, is that he’s not cut from the culture of the sheriff’s office.

It’s not that this space will not interview Cunnie and Miyamoto – quite the contrary because San Franciscans need to have as much information as they can to make their own decisions. But the San Francisco Sheriff’s race offers a clear contract between “guns and butter” – this blogger chooses butter.