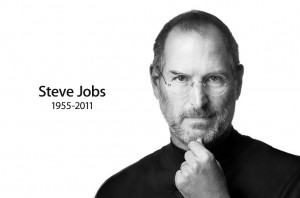 The passing of Steve Jobs on Wednesday was reported by AdWeek.com and by theage.com to have broken the Twitter tweet-per-second record, moving Beyonce’s Baby Bump announcement aside as the most tweeted about event on Twitter in history, with 10,000 tweets per second.

But that’s not true.

According to a Twitter spokesperson, as quoted by the Twitter measuring firm sr7.com, which found itself correcting its own news on the supposed record:

In fact, according to a Twitter spokeswoman, at the time the news was spreading, around 5 p.m. Pacific time Wednesday, the microblogging service’s internal data showed a rate of 6,049 tweets per second. That’s faster than people were tweeting after the announcement of Osama bin Laden’s killing (a little over 5,000 TPS), but well below the 8,868 TPS recorded during newly-pregnant Beyonce Knowles‘s performance at the MTV Video Music Awards last month.

But while Steve’s passing didn’t break the suddenly-as-of-this-year important tweets-per-second measurement, it did dominate over 15 percent of all tweets on Twitter according to Trendistic.

But even then, the conversation about percentage of all tweets reveals another Twitter impact reporting problem: that was just for one moment in time, the stat does not reflect the fact that people continued to tweet about Steve Jobs at a high rate for the next day, Thursday. Thus, the percentages should be accumulated and added, not present the highest point of Twitter percentage.

Why? Because not to do so implies that the volume hit 15 percent, then dropped to zero, when that’s not what happened, as the photo above shows.

Apple CEO Tim Cook, Apple Founder and CEO Steve Jobs’ pick to replace him prior to his passing (both shown above), can look back and laugh at Victoria Murphy (now Victoria Murphy Barrett) an Associate Editor with Forbes Magazine to this day, who, in 2004 let loose with a character assassination that basically said he […]