It was Mom who called to say that “Steve Jobs died of cancer,” and at the time, this blogger was bound for the gym. Instead, the entire evening schedule of workout and work was tossed in favor of going down to the SF (San Francisco) Apple Store. Why? Because a Foursquare note on my Apple iPhone (thanks, Steve) told me that former ValleyWag Editor Owen Thomas was down there laying flowers in honor of Apple and Pixar’s Mr. Jobs.

On the BART ride over, it was hard to hold back tears and finally they just plain came out. Death is not something yours truly deal with well at all. And this, the sudden passing of Steve Jobs, was not an easy bit of news to address at all. Frankly, for a time this year, Steve seemed on his way to beating Pancreatic Cancer (Yes, with caps.) But the Apple co-founder’ six year long battle was over and at the still-young age of 56.

It came as no surprise that the Apple Store turned into a memorial of Steve Jobs. One side of the glass window was spontaneously covered with post-it notes reading everything from “Love you Steve Jobs” to “Steve Jobs RIP” and scores of other messages. Below the notes, candles and flowers and a large sheet of paper with “Apple” surrounded by a heart.

As the video shows, a number of people gave their views of Jobs passing. It’s not habit here to record names in the video, because more people feel free to talk than if they have to give their name. So, a variety of views are presented.

At the Apple Store SF, one man said that “I don’t know why, but I’m so sad. He changed our world more than most people you read about in the story book pages in the elementary schools.” That man’s right. It’s time to change the books.

Over at Gold’s Gym in Oakland, Carol Luna, who works the evening shift, said that while she doesn’t have Apple’s computer products, she does have an iPod, and noted that Jobs gave Sarah Palin the ultimate “f-you” as she put it, just by the news of his passing blunting her announcement that she was not running for President Of The United States. Had to chuckle about Carol’s observation. 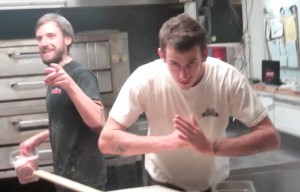 Over at Lanesplitter Pizza on Lake Park in Oakland the two dudes who make great pizzas were not as, er, charitable in their remarks about Steve, preferring to note that he was “rich” even as I countered that he started his business when he was 21, and left college (Reed College) to do so.

The Oakland Lanesplitter Pizza guys were more interested in giving a plug for Occupy Wall St., which is fine, but it does it have to put down Steve Jobs for growing a business? Is that what Occupy Wall St. is all about? Slamming anyone who achieves success, even a cultural icon like Jobs?

Oh, well. The Oakland Lanesplitter Pizza joint does make great Calzone, even if I disagree with their take on Jobs’ passing. Jobs is a Bay Area legend.

For this blogger, Steve Jobs will always be the symbol of San Francisco Bay Area entrepreneurialism, and the one shining example of how this region has almost single-handedly changed the World for the better. From Apple and Pixar, and Lucasfilm, to Google, to Facebook, and Foursquare, and Hewlett Packard and Cisco and many other companies large and small, the San Francisco Bay Area has emerged as perhaps the most important region in the World.

You can, in large part, thank Steve Jobs for that.

Stay tuned. That’s not the only video of Steve Jobs remembrances coming.