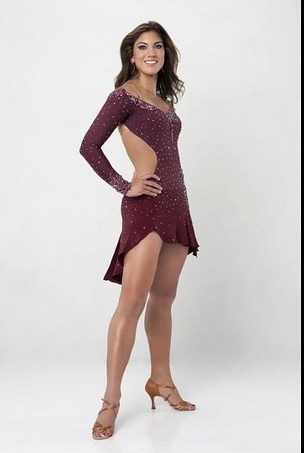 Hope Solo’s Great Legs In DWTS Dress, a photo by zennie62 on Flickr.

This is USA Women’s Soccer Star Hope Solo’s first official Dancing With The Stars photo. For all who wondered what the self-described “tomboy” would look like in a dress and heels, this hot picture answers the question.

And the reason for this blogger’s video shout out:

Frankly, Hope’s got all of the Dancing With The Stars female contestants beat – her athletically-honed legs are awesome. And once DWTS viewers get a look at her when the show airs, they’ll come back for more.

For some reason People Magazine – to name some of the top gossip rags – has featured only a handful of DWTS contestants: Ron Artest, Nancy Grace, Kristin Calavari, David Arquette, and Chaz Bono.

But no Hope Solo in the cast photos.

The reason, I think, has to do with what PR firms influence how DWTS is covered. I can’t prove this; it’s a null hypothesis at this point. But where there’s smoke – the coverage – there’s fire.

Irish IndependentPublished 05/06/2014|07:11. 0 Comments; Share. Justin Bieber claims facing up to a video in which he used a racial slur is one of the “hardest things” he’s ever done. Share. Go To. Comments. The 20-year-old singer has caused widespread outrage this …Justin Bieber appears in another video making bigoted remarks; singer …New York Daily […]

Star Wars, Avengers boost Disney outlookOrlando SentinelA new analyst upgrade for Disney on Monday is being credited for sending stock higher, and the upgrade specifically mentioned Avengers and Star Wars, according to multiple financial news outlets. cComments. Got something to say? Start the conversation …iTunes and Star Wars: Thanks but no thanks, Disney!Las Vegas Blog […]