Rod Blagojevich should prepare himself for prison, because although having his wife on the NBC show I’m A Celebrity Get Me Out Of Here to try to win him some sympathy and let her convince others that her husband should not go to jail – it didn’t work. That was two years ago, remember with Heidi and Spencer and Janice Dickinson and all the other Baldwins? Well, that’s not relevant anymore.

“Patti and I, obviously, are very disappointed by the outcome,” Blagojevich told reporters after leaving court. “I, frankly, am stunned. There is not much left to say other than we want to get home to our little girls and explain things to them.”

That is actually sad to think about – his daughters having to deal with all of this and having their own lives and personal relationships corrupted due to who their father is.

Every news source out there is going crazy with reporting that Blagojevich is going to jail – even the Irish Times has something to say, but they of course obtained their information from Reuters. The report is this:

A jury in Chicago yesterday convicted former Illinois governor Rod Blagojevich on 17 of 20 counts in a corruption trial, including on charges he tried to swap US president Barack Obama’s former Senate seat for personal gain.

Blagojevich, a two-term Democrat thrown out of office in 2009, was found guilty on all but three counts of attempting to secure personal benefit and campaign funds in exchange for appointing a US senator to fill the seat vacated by Mr Obama after he was elected president in 2008. 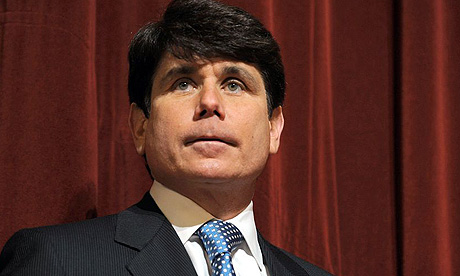 How great it would be to be able to get to interview Blagojevich; some news sources are calling him the latest “jail house celebrity” and how sad is it that it has come to the point in society where politicians are now celebrities (McCain’s ad campaign against Obama called him a huge celebrity, but then he picked Palin for his VP).

Donald Trump fired Rod Blagojevich last year on Celebrity Apprentice, and now Trump is saying that he feels bad for Blagojevich. He tells a blogger at Forbes:

“I got to know [Blagojevich] based on the fact that he was in The Apprentice and I always felt bad for him,” said Trump. “It just seemed like he was in over his head, you know what I mean?”

A tragedy? This situation is definitely not worthy of being classified as a tragedy, but it is something that will be interesting to follow up with and watch as he kisses his family good-bye and enters the prison.. will he give a heartwarming speech? Or will he continue to be booed as he was today as he left the courthouse:

The jury has spoken.