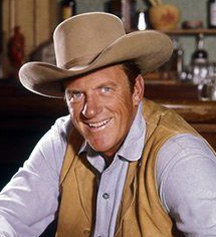 Gunsmoke, a favorite television show of this blogger when he was little, and a program that seemingly would never die until it’s last episode aired in 1975, was the place where the name Marshal Matt Dillon became a household word.

Matt Dillon was expertly played by James Arness, who passed away at the age of 88 today, of natural causes, according to his website.

James Arness was a man’s man, and comes from a time when we expected actors to be taller than we were; he stood 6-foot-seven-inches in height. Arness, and his character Marshal Dillon, also stood tall in character.

“He had to specifically obey the letter of the law, no matter what else was going on,” Arness said to the Archives of American Television. “He, number one, which I think was a totally different approach to other westers, even western movies, is he hated violence, particularly shooting. He hated to kill a man. And I tried to get that across, in the early going. I tried to get that across… It’s something that not had been done, up to that point.”

Here’s a scene from Gunsmoke:

Arness also starred in the iconic science-fiction films Them and The Thing From Another World. Arness played the Thing because of his 6’7″ height.

His website’s message concludes with this:

Jim will be deeply missed by his family and friends. In lieu of flowers the family asks that donation be made to United Cerebral Palsy in Jim’s name.

Jim is survived by his wife Janet, 2 sons and six Grand kids. The services will be private for family only.

Here’s an interview with Mr. Arness with an introduction by John Wayne: